On The Way To Revitalisation

Read more: On The Way To Revitalisation

In December 2016, Wiehl's mayor Stücker emphasised the chances of the Wiehl valley railwayline with regard to a usability that should go far beyond occasional tourist rides in his budget speech. In doing so, he announced to seek talks with the railwaymen.

Development of the surroundings of Morsbach Stn. 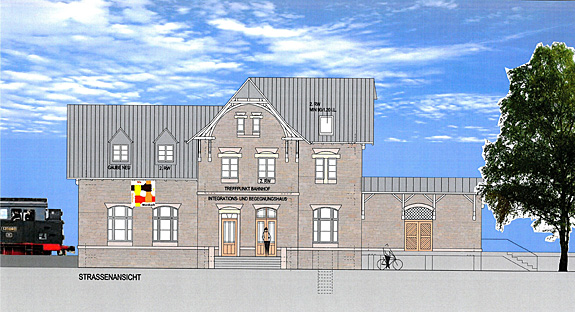 Spurred by the 'integrated concept of action', which was worked out for Morsbach last year, the municipality could take ownership of the DB area including the existing railway facilities after years and years of talks on March 3rd, 2017.

Read more: Development of the surroundings of Morsbach Stn.

Press Account: Railway Gate In The Town Centre Of Wiehl

First plans are dating back nearly 20 years. Finally the railway gate has been erected in the town centre of Wiehl. But it is not ready-to-operate yet. Regardless of the fact that trains do just sporadically run here on this branch line, a barrier system like for high speed lines is prescribed by the regulations.

On September 8th, 2017, the new "Boxberg"-roundabout in Waldbröl was officially dedicated. The 'guest of honour' (steam locomotive 'Waldbröl' of the 'Bergischer Löwe') was welcomed enthusiastically.